25.06.2018 Congratulations on the successful defense of Budin Victor, who performed a bachelor’s degree thesis at the Department of Theoretical Physics named E.V. Shpol’skii.

24.05.2018 A.V. Naumov took part in a scientific seminar on modern aspects of visualization and diagnostics of single molecules by means of luminescence at the Institute of Physics of the Kazan Federal University (Kazan, Russia)

24.04-26.04.2018 Participation in the IV Russian-German-French Laser Symposium.  The number of attendees included 10 invited participants from each country: Russia, French, and German (Kazan)   >>>

12.04.2018 The first seminar of the joint Department of Condensed matter spectroscopy, Institute of spectroscopy RAS
Speaker: Dmitry Sergeevich Dovzhenko (post-graduate student, engineer-researcher of NRNU MEPhI)
Topic: Photophysical properties of hybrid systems based on semiconductor quantum dots and photonic crystals from porous silicon (report on the materials of the Ph.D. thesis, ISAN is the leading organization).

25.03.2018 Two events took place in the Institute of Physics (MSPU): “The Physical Living Room” and the lecture on the theme “New Materials and Instruments for Optics and Photonics” by Andrey Naumov, Professor of the Russian Academy of Sciences   >>>

04.03.2018 Laboratory of Electronic Spectra of Molecules and the Department of Theoretical Physics named E.V. Shpolsky, friends, colleagues and students sincerely congratulate the doctor of physical and mathematical sciences, Professor Igor Sergeyevich Osadko with the 80th anniversary! 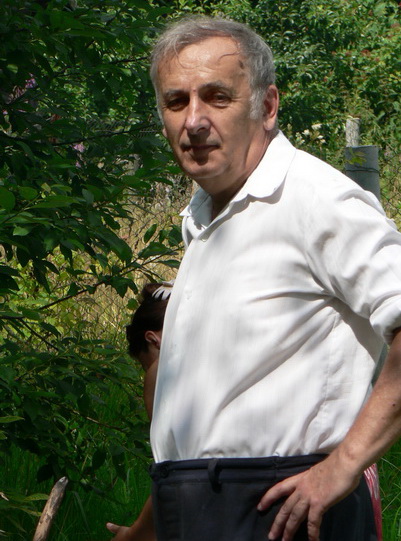 09.02.2018 Eremchev Ivan Yurievich was awarded the diploma of the head of administration of Troitsk and Troitsk scientific center of RAS for special achievements and personal contribution to the development of scientific potential of Troitsk city district. Andrey V. Naumov was awarded the honorary title ” Man of the year “by the science city Troitsk 2017 in the nomination” City and society “for the organization of the first Trinity school of advanced training of physics teachers:”Actual problems of physics and astronomy: integration of science and education”. 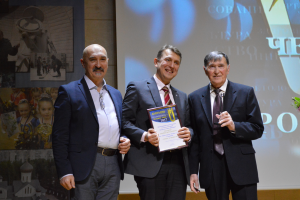 22.01.2018 Seminar of the Department of theoretical physics. There was a report on the materials of PhD thesis.

26.11.2017 Andrey V. Naumov gave a lecture in the framework of the project ‘University Saturdays’ 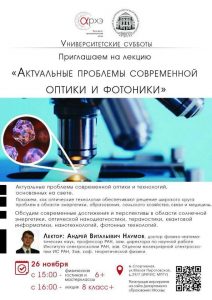 17.11.2017 Arzhanov Artem took 3rd place in the XV all-Russian youth of the Samara competition-conference of scientific works on optics and laser physics.

14.11.-18.11.2017 Participation in the XV all-Russian youth of the Samara competition-conference of scientific works on optics and laser physics (Samara)    >>>

9.11.-13.11.2017 Participation in the XI International conference: modern nanotechnologies and nanophotonics for science and industry (Suzdal)   >>>

30.10.-03.11.2017 Participation and organization of Troitsk school of professional development of physics teachers «Actual problems of physics and astronomy» (Troitsk)   >>>

30.10.2017 Prof. A.V.Naumov has participated in General meeting of the Professors of the Russian Academy of Sciences and Board Meeting of the Physical Branch of RAS   >>>

24.10.2017 The ceremony of awarding certificates to winners of competition on competition of grants of the President of the Russian Federation for state support of young Russian scientists – candidates and doctors of Sciences in the Central Federal district was held in the Central house of scientists.  Kamil Karimullin and Ivan Eremchev received grants in physics and astronomy.

21.09.2017 Arzhanov Artem – winner of competition of scientific works of young scientists at the international Symposium PECS-2017